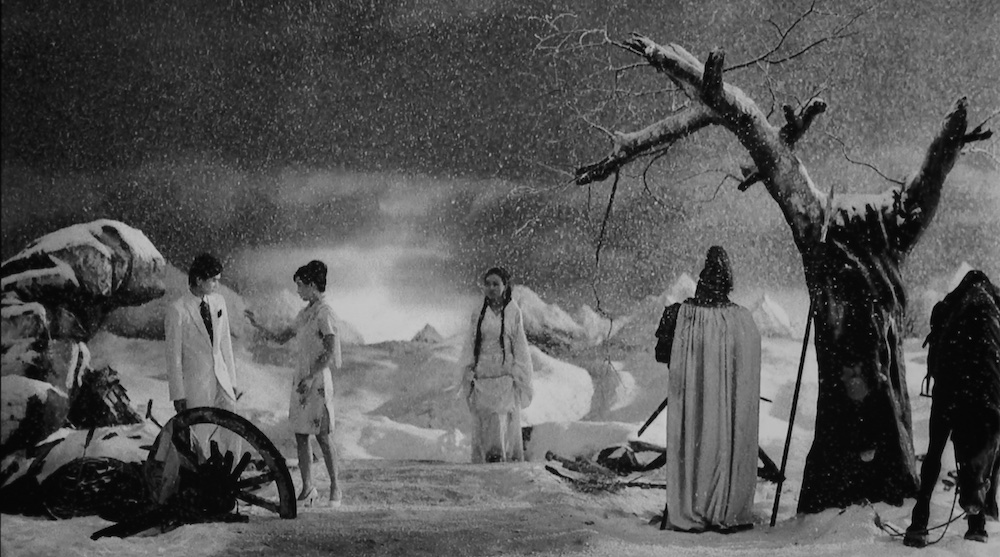 Set in a frozen wintry landscape with snowflakes gently floating to the ground, “Yejiang/The Nightman Cometh” unfolds in the realm of historical fantasy, suffused with haunting music by Jin Wang. An ancient warrior dressed in seventeenth-century military garb and forlorn after battle is shown camped by a fire, the set’s artificiality immediately evident from the unnatural appearance of the snowbanks. The soldier is joined by three other figures: a woman in generic antique attire, described by Yang as a “princess,” and a ghostly man and woman in white costumes associated with 1930s Shanghai. Also appearing are: the soldier’s horse, a group of deer, and a hawk.

For Yang, the figures symbolic significance is: the princess represents purity, the couple the “uncertainty of the future,” the horse loyalty and trustworthiness, the deer purity and family. The hawk is understood as a double of the soldier, as well as a symbol of spirituality. In Chinese, the title may be read as “general at night” and “imminent night,” both senses being literally descriptive, since the film evokes nightfall. Action is minimal. The soldier plants a spear in the snow and starts a fire under a cooking pot. The princess feeds a deer. The hawk beats its wings dramatically. The soldier rides his horse away. With the exception of the horse, the soldier does not interact with or display any awareness of the other figures, whether human or animal. One begins to wonder if they might be less physical presences than manifestations of the soldier’s psyche.

“Yejiang/The Nightman Cometh” may reflect on Yang’s life—particularly, the transition from his conservative military childhood to his cosmopolitan career as an artist. In the film, a wounded and forlorn warrior is seen after a battle, apparently now questioning his path in life. In this dramatic and hyper-realist film, three ghost-like characters appear to personify the chaos of feelings and thoughts that surface and clash within the warrior’s heart and mind as he swings from enthusiasm and happiness to disappointment, grief and despair, thus revealing what takes place in a man who is required to demonstrate strength and courage in times of war and crisis.