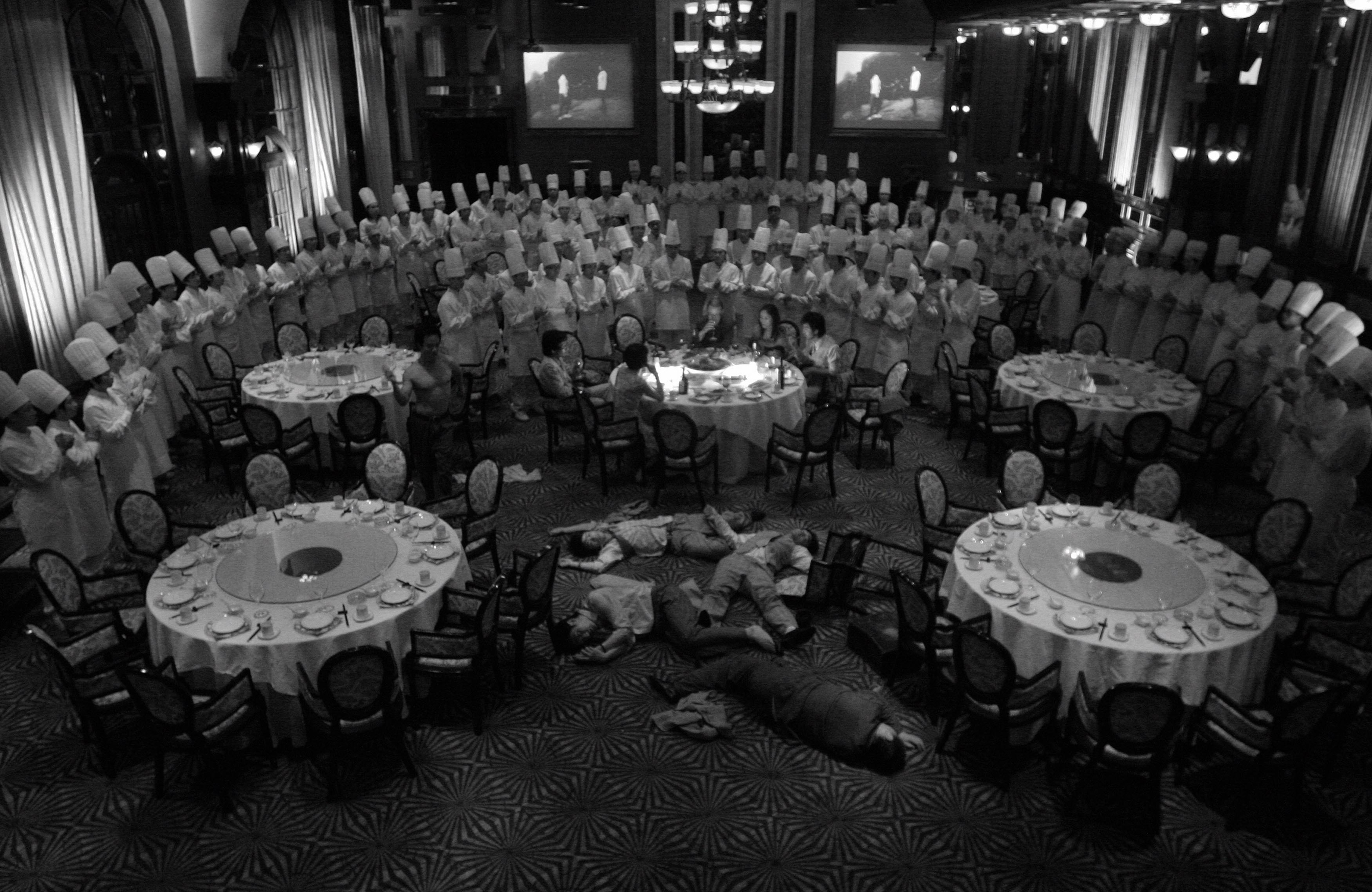 SEVEN INTELLECTUALS IN BAMBOO FOREST, PART 5, 2007
35 mm b/w film transferred to DVD; 90 min.
While attending the China Academy of Fine Arts in Hangzhou (1995), Yang Fudong was inspired by the story of the Seven Sages, or Seven Intellectuals, who frequently acted on their emotions and were free thinkers and idealists. In ancient Chinese art history, the Seven Sages of the Bamboo Grove were a group of notable Chinese philosophers, poets, and musicians of the Wei and Jin dynasties (220-420 A.D.). During a time of political upheaval, the group distanced themselves from government service, choosing instead to spend time engaged in Daoist-inspired discussions, music, poetry, and heavy drinking in hopes to escape earthly life. “The Seven Sages of the Bamboo Grove” doesn’t exist as a book: there are legends, popular stories, hearsay knowledge, and the stories have continually been adapted to changing contexts and times and to the intentions of different storytellers.
Shot over a period of five years in China, "Seven Intellectuals in Bamboo Forest" (2003-2007) is a five-part black-and-white film imbued with an avant-garde, film noir aesthetic, as well as Shanghai cinema of the ‘30s and ‘40s. Yang: “I wanted to articulate several temporalities together—one that is really ancient, the stories of ‘The Seven Sages of the Bamboo Grove’ and another set during the ‘50s and ‘’60s when there was a profound questioning of the status and role of intellectuals.” Though lacking an explicit narrative, the film has dialogue, sound, and music. In Part 1 and Part 2, music by Jin Wang. Like Part 3, the fourth part has no music or dialogue, only natural sounds sourced in situ by Huang Xun and Dai Dai. In Part 5, the soundscape—by Huang Xun and musical accompaniment by Zuoxiao and Chen Shanni—underlines the drama of certain shots of the landscape or the intense close-ups of the protagonists.
In this final part, the seven intellectuals return to the city where they take up banal jobs and confront their contemporaries with their new experiences. They believe that if any problem arises, they alone can solve it. However, they begin to feel lost. Filmed in Shanghai, many of the locations are reminiscent of the ‘20s, the golden era of Shanghai. A fashionable restaurant where the film opens and closes, lends the film “a little bit of bourgeois extravagance.” The seven are shown drinking in a banquet hall with the scene taking on an increasingly surrealistic and nonsensical tone, seemingly analogous with the nature of urban life. Though filmed fifteen years ago, this final part of "Seven Intellectuals in Bamboo Forest" provides an insight into China and the impact that radical changes were having on individuals, and on their search for a role and an identity. Yang belongs to a generation of artists who chose to remain in China as opposed to moving to the West. Yang: “To me, the great changes that are happening today in China and in society can be seen and perceived in various forms. This transformation relates to people’s attitude amidst the many changes in their way of thinking and their ideology. Numerous factors come into play—the loss of traditional values and even the concept of tradition. In this sense there is a loss. At the same time, the arrival and assertion of the new sometimes creates a sort of selfish existence that doesn’t have much meaning. What is lost is the idea of living together, a collective search for a better life.” [1]
Postscript of "Seven Intellectuals in Bamboo Forest" by Yang Fudong, 2009
Part one: A postcard-like set of travel notes on the good life.
Part two: Closed life in a flourishing city. No matter what city you inhabit, you understand nothing better than your own family, your home, and those private spaces that truly belong to you.
Part three: Another kind of life. They leave the city and head into the country, a real farming village, plowing by day and resting by night, forgetting all that bothers them.
Part four: A tiny island of belief. They like the sea. They like living undisturbed, isolated. Perhaps this is life in utopia.
Part five: They return to the city, devoid of identity. Perhaps they are many people, perhaps they are seven. Perhaps they are in a dream. From the beginning to the end, they cannot find their position. They are still a collective of youth, a future, unknown collective.
1 "Yang Fudong, the Foreigner and the Search for Poetic Truth," Marcella Beccaria, translated by Marguerite Shore, 2006