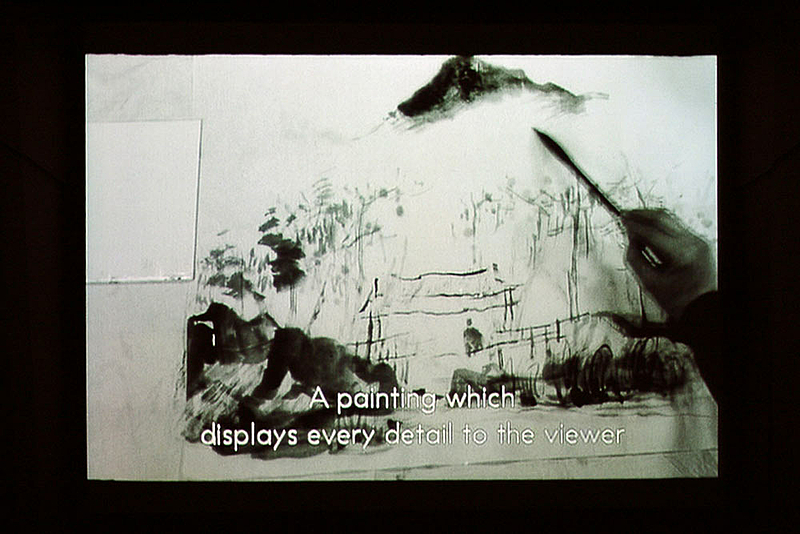 Chinese ink painting holds an essential place in traditional intellectual life as an educated person in ancient times was expected to master the Four Arts: qin (zither/music), qi (go/board game), shu (calligraphy), and hua (painting).
Cited as a “quiet masterpiece,” Yang Fudong’s first film, An Estranged Paradise, begins with brush in hand, black ink, and the painting of a landscape, while demonstrating and providing a treatise on the techniques, qualities, proscriptions, and meanings of painting a Chinese landscape. [Yang tells us:]
~ For the Chinese, landscape painting is a way of representing nature.  ~ Natural landscape has always kept on communicating with man’s thinking.
~ The Chinese landscape painters have a set of their own language to convey their comprehension of nature.
~ When painting a landscape we must master the techniques of painting rocks and trees.
~ The ancient people proposed in landscape painting that a piece of rock should be divided into three parts and a tree should be composed of five branches.
~ In this way, painters depict space without betraying the physical states of nature.
This more than four-minute segment is a prelude to the film’s title—An Estranged Paradise, appearing on the screen. Yang’s script for the film follows his graduation from the China Academy of Art (1995) in Hangzhou where, like all artists of Yang’s generation, he was trained in traditional Chinese landscape painting.
An Estranged Paradise is a poignant psychological drama loosely based on Jim Jarmusch’s Stranger Than Paradise. Yang’s film follows the activities of Zhuzi, a young man in Hangzhou (also known as Paradise for its natural beauty), and offers a rare glimpse of life in China circa 1997. Through a fragmented narrative, we follow Zhuzi as he lifelessly goes about daily life with a sense of alienation and disengagement, seemingly drifting from one romantic relationship to another, and suffering from an undefined illness.
The film’s multiple montage sequences conjure up a psychological and poetic landscape not unlike the experience of an ink painting. Yang, who was born during the Cultural Revolution and came of age when China was modernizing, has effectively mapped out the state of mind of a character experiencing life rapidly evolving around him.