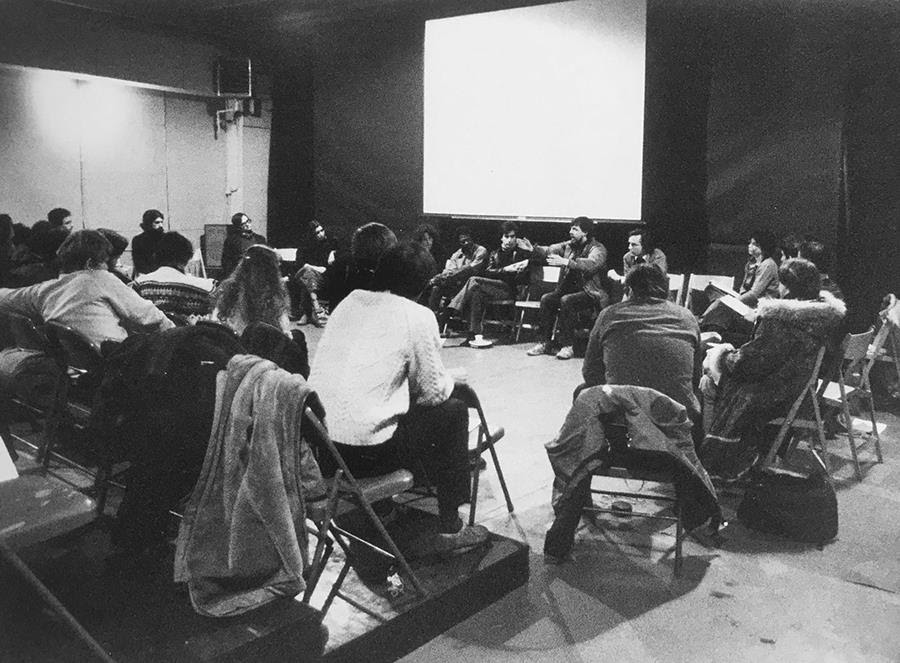 Saturday, February 21, 2015, 12–4pm
Led by Thomas Beard, this event will follow the workshop-style format of early screenings of Argument (84min) in the late 1970s where each screening was followed by a discussion among the members of the audience. "In this sense, the film would be no more than an element in a larger 'argument'.”

Anthony McCall and Andrew Tyndall’s legendary and provocative essay film ARGUMENT, first screened at the Edinburgh Film Festival in 1978, and it has been almost unseen for the last twenty years. "Argument" has been described by its makers as “a film of intervention.” Partially inspired by Godard and Gorin’s "Letter to Jane," it is an essay film built around images of men’s fashion ads from an issue of the New York Times Magazine. Fashion photographs are used as a starting point for a political investigation of news, advertising and images of masculinity—while at the same time, the filmmakers reflect on their own position and the possibility of a radical film practice. The film has been made to engage those very problems that filmmakers confront economically, aesthetically, theoretically and politically.

THOMAS BEARD is a founder and director of Light Industry, a venue for film and electronic art in Brooklyn, New York. Light Industry explores new models for the presentation of cinema, drawing inspiration from the history of alternative art spaces in New York as well its storied tradition of cinematheques. Beard has curated film programs for, among others, the 2012 Whitney Biennial; "Unfinished" for the Metropolitan Museum; and "Couchsurfing" for multiple venues. Beard has presented numerous works of Anthony McCall’s, including the installation of "Long Film for Ambient Light."
Recording